Acceleration with AC on

Acceleration with AC on

Every now and then I turn on sport mode, turn off traction control, turn off the air conditioning, and stomp on the accelerator, just for a bit of fun. But then I thought to myself, this is an EV. Do I really have to turn off the AC? In an ICE car, the air conditioning compressor is mechanically connected to the engine and robs it of horsepower. But in an EV, the compressor has its own electric motor, not connected to the drive train at all. Yes, it does rob the battery of electricity, but there's no reason to expect that it subtracts from the available power to the drive train. Presumably, the drive motor's maximum power is set by a control system, and the accessories are all limited or fused individually. There may be a maximum allowable bus power, but it would be pretty poor design if the electrical bus could only provide exactly as much power as the drive system needed. Efficiency and range may be affected, but performance shouldn't be, right?

The AC really doesn't need all that much power, but what about the heat? Plus the degradation during winter? Is the electrical bus robust enough to supply full power to absolutely everything without limiting drive train power during the winter? Yes, range will certainly be reduced, but is performance limited as well? I haven't driven in the winter yet. Is acceleration limited based on temperature alone?

Re: Acceleration with AC on

The Li-ion batteries should be capable of some very high discharge rates, but it's not unlimited. Depending on construction, anywhere from 2C - 30C discharge rate can be expected.
For a 14-18kWh battery, 10C would allow 140kW - 180kW discharges depending on SoC. But is it really that cut and dry?

If you've ever requested the maximum 120kW to the motor inverter, you'll know there is a certain SoC where it will NOT deliver that power. This means that there is a certain point in the standard Li-ion range of 3V - 4.2V, or 288V - 403.2V in a 96S pack, that peak power will be less than 120kW for one reason or another.

Just like the compressor on a belt and pulley system loads the engine in an ICE, a compressor at a full-tilt of, say, 4kW would load down the Li-ion batteries and you'd see a non-negligible drop in battery voltage. For a Spark EV with 15kWh of capacity, 4kW constitutes a 0.267C discharge. This would be added on top of the 120kW discharge, or 8C discharge + 0.267C.

I don't have LG's pouch discharge curve characteristics, but for cylindrical cells, there are many examples.
Take a look at the discharge characteristics for this 5Ah 21700 lithium cell: https://lygte-info.dk/review/batteries2 ... %20UK.html 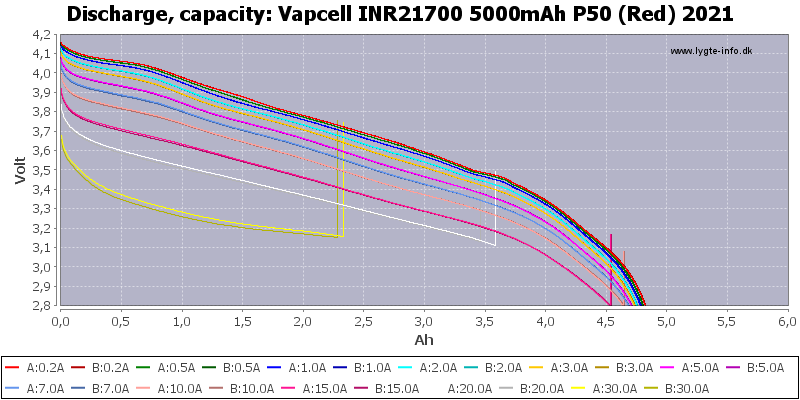 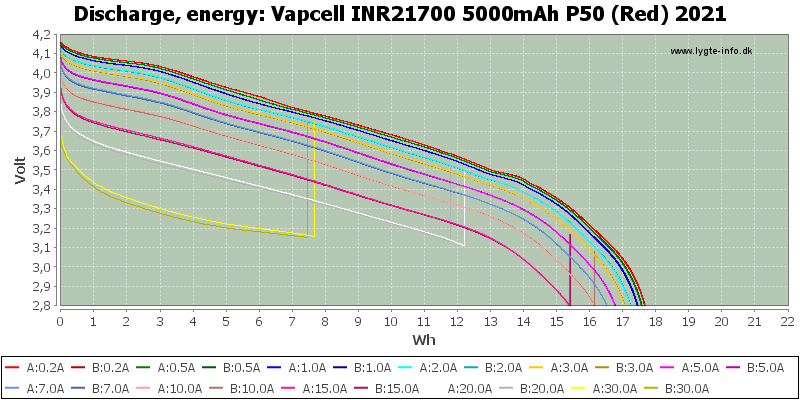 
0.267C (1/4C) would represent a 1.3A discharge curve (closest to blue line) on this graph. Compared to a gentle 1/20C or 1/25C discharge (top red line), we are seeing a voltage sag of 0.02V. It's not much, but this sag would be multiplied by 96 for 96 cells connected serially (the same current is flowing through all serial cell groups.)

Now let's slam on a 6C discharge (yellow line above). We see a 0.7V difference between the gentle discharge and the aggressive one. In a 96C pack, this 0.7V * 96 would turn into a 67V drop in cell voltage. But 6C for a 15 kWh degraded Spark battery pack roughly accounts for 90kW of power. It would need an 8C discharge rate for 120kW. To make matters worse, this power pushing through the internal resistance of the cells increases temperature as seen in the below chart with temperature in the Y-axis on right-hand side, requiring more power usage to run thermal management. 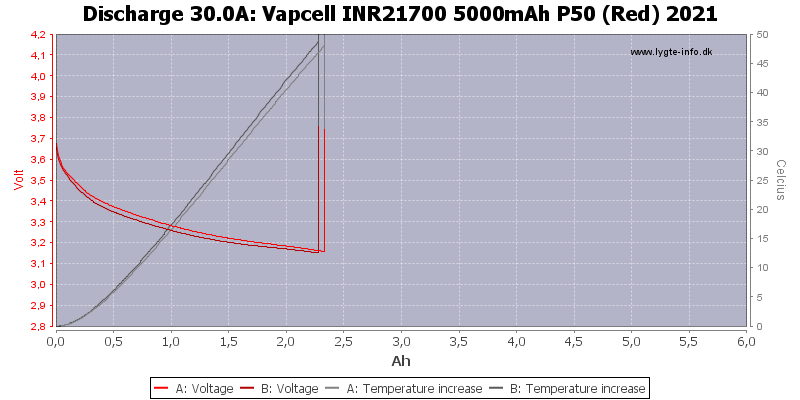 In other words, depending on the discharge characteristics of pouch cells, a full-power acceleration with the AC on could pull upwards of 9-10C on the batteries.

In summary, when we view some discharge characteristic data, we see that high discharge rates reduce available power from a system. As other high and low voltage loads are added to an already aggressive discharge, the voltage sag will eventually reach a point where peak power to the motor will be limited to protect the cells from overcurrent discharge, or a loaded undervoltage cutoff. Or it could be that the working voltage simply results in a lower available power (power = voltage*current). These limits will occur sooner if the state of charge is already below nominal. But at what SoC I haven't paid close enough attention.

Maybe someone can can stomp on the throttle and see at how many battery bars they aren't getting 120kW, just so we all know, hah.
Post Reply
2 posts • Page 1 of 1

Return to “Engineering and Features”