Hi Has anyone tried this camera?. I really want to get one but I am scared it might be bad quality or might not even work at all.

looks oem to me.

I get a bit nervous when ordering something that ships directly from China. Notice if you buy it you have to pay for return shipping if it does not work. If it works great, if not you may be out $13.

The challenge is getting the camera to show up on your cars screen. You may read this whole thread if you have time it has good info on 2 different approaches to get this to work.
2016 Spark EV
2017 Volt

NO, don't order these cameras, first the quality is crap and it just won't fit properly.

Make sure you specify MODEL: 8183 when ordering.

I ended up installing a backup camera on my car. I ran into some issues so I wanted to share my experience for anyone else interested in doing this.

I ordered this camera https://www.amazon.com/gp/product/B07Q2 ... UTF8&psc=1. I ordered since it showed that it had a sealed light bulb and I could always cut the OEM one and superglue it on like someone else showed. BUT when I received it the housing was open. I ended up continuing to install it and I wrapped the base with electrical tape to make it weather resistant. I did have to hacksaw the old housing, file it down and super glue it to the new housing so the bulb fit correctly. 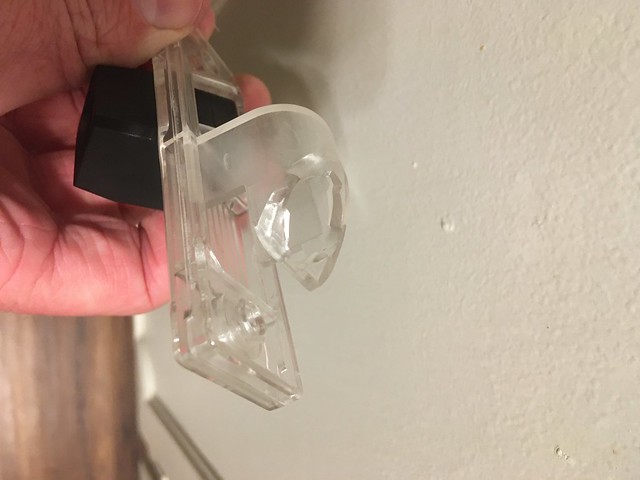 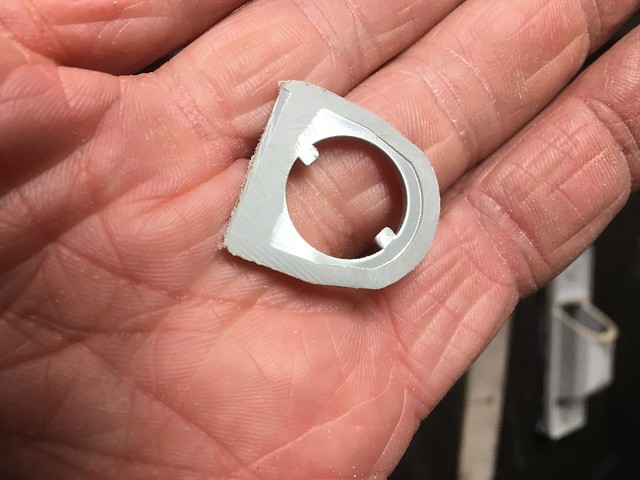 Existing part of license plate lamp cut off and sanded to accept superglue and hopefully provide a water resistant enclosure. 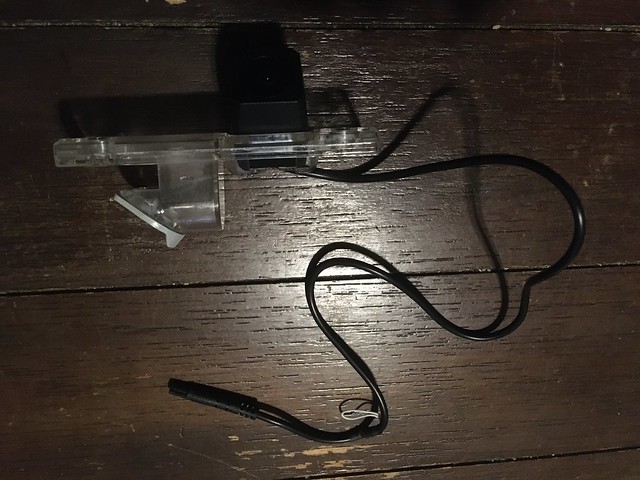 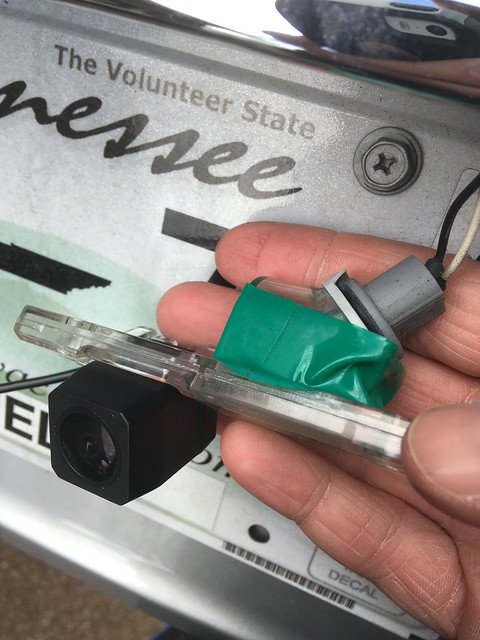 Camera/lamp assembly modified and opening sealed with electrical tape. I rolled the tape down flat on the edges so when it is installed the screws sandwich the tape between the body and the housing so it is not strictly relying on the adhesive.

You must remove one screw (where you pull the door shut on the inside) and gently pull to remove the inner hatch panel. When you remove the license plate lamp (passenger side one) there is a grommet just behind it where you can snake the wire inside around the edge without having to remove the exterior trim or wiper arm.

The next issue I ran into was that the cable from the camera was too short to be able to reach the flexible rubber wire housing at the top of the hatch where the existing wires run. If it reached it would have been perfect and probably fit through that grommet. 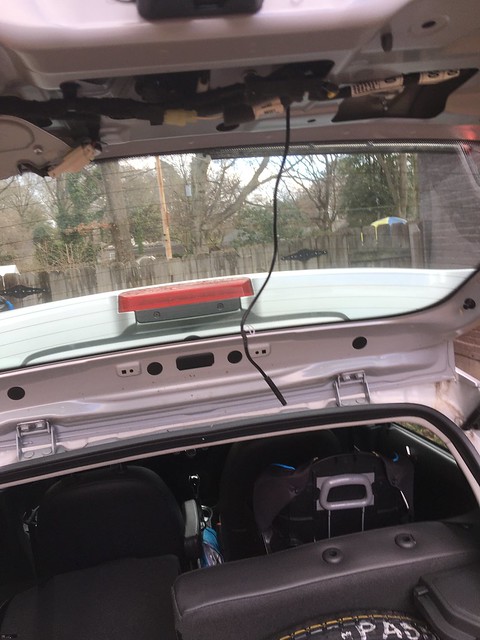 This wire is very small and would be great for snaking if it was longer, but unfortunately it is not. 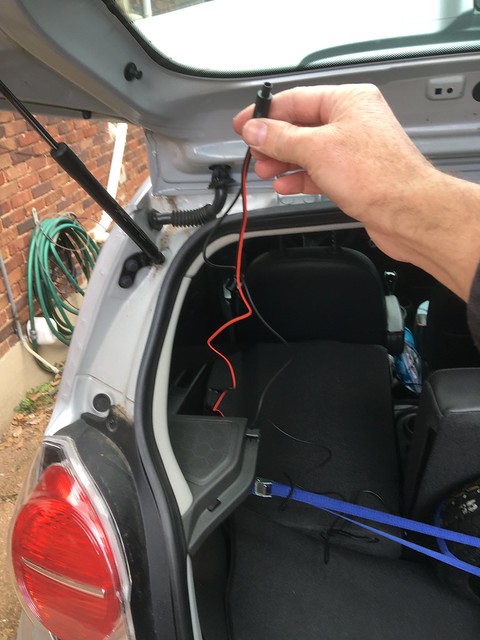 This is the female end of the wire harness above but it is about 3 times the diameter.

Since it did not fit I ran some wires from where the cable could reach down to the tail light to tap into the power of the reverse light. I tapped in behind the side panel on the driver side of the car [the one with the cargo area light] (black wire with a white stripe is the backup light ground and the pure white wire is the positive.) I did remove the taillight to figure out which is the positive and negative but I would not tap into these wires outside of the grommet as the connection and wires would be exposed to the elements. I used T-Tap connectors for a quick and easy connection. The component cable was an RCA end and that will not fit through the rubber wireway so I had to tuck the wires in along the window/ glass gap and run it to the top of the door. Once there I left just enough cable slack for the hatch to open and then started tucking the wires under the rubber liftgate door seal on the car body. Once the wires got below the speaker shelf the wire then ran behind the panel that was removed for tapping into the reverse light power and then ran forward along the edge of the car from there. With that said getting the power lines into the rubber wireway may not be necessary if you just run your power and component cables down to the speaker shelf and have the power lines split off to the power and the component cable continue forward. 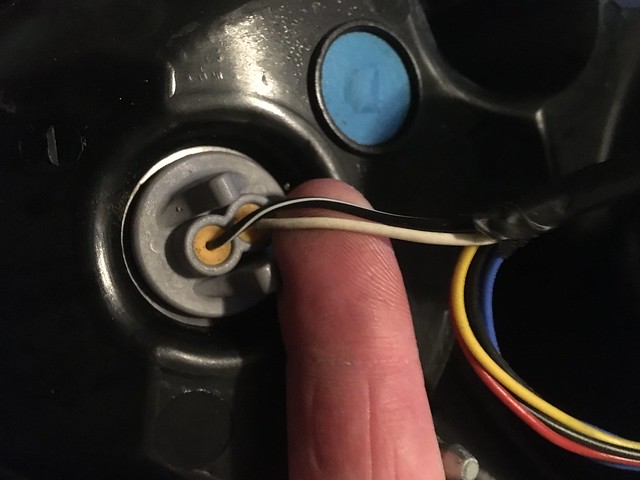 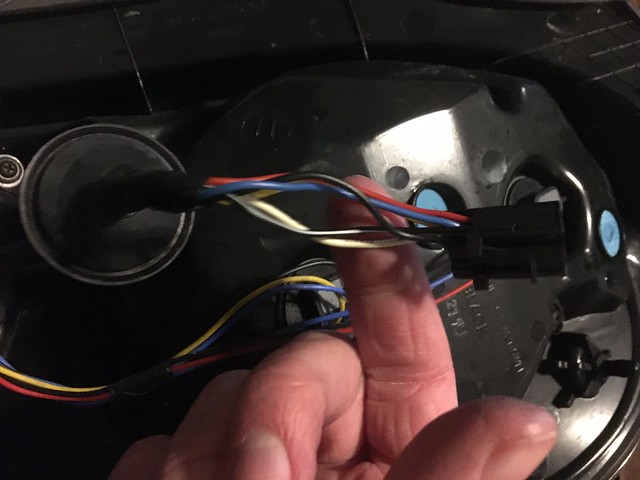 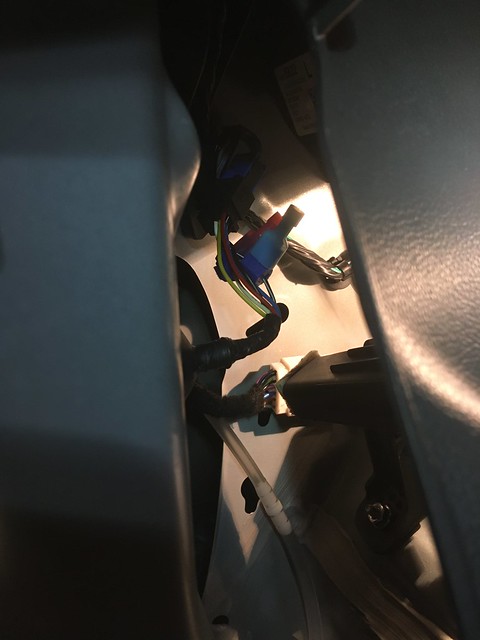 T-Taps installed on factory wiring. (No wires attached yet I was testing polarity at this point)

The back seat plastic edge trim has 1 screw holding it in and the rest of the trim along the door sills and the B Pillar trim just popped off after those were disconnected. The trim at the front had one large round threaded nut you can unscrew with your fingers and one plastic fastener you can just pull out while you are pulling on the trim. From here I ran it through some of the knee space metal so it wouldn't fall down by the pedals or be in the way of the knee airbag.

Currently I have the RCA to headphone jack adapter plugged into my Aux-in port unfortunately I got one that has to have an adapter (OMTP-CTIA) and it sticks out more than I like. When shifted to reverse for the first time the backup camera shows up but part of the view is blocked. If you touch the screen the menus go away and the camera is full screen. When you shift out of reverse it changes to Aux-in audio which there isn't any. I just change the input right now. If you shift back to reverse you have to change it back to aux-in video if you need the camera. If you shift quickly through Reverse to drive the camera will not come on. I tried a RCA to USB adapter and it did not work at all. I did order a relay but wanted to test out some of these other options to have an easier option for anyone wanting to do this in a way that may require less cutting into the cars wiring. I may just leave mine in the Aux-in port since it's only 2 taps to change to music. 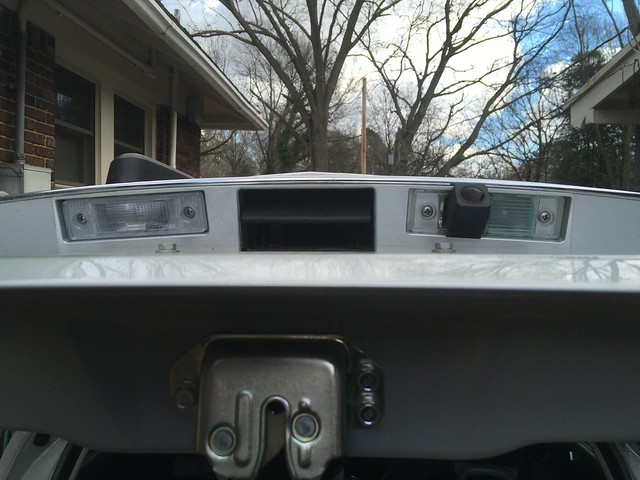 OEM License lamp vs the product I purchased. 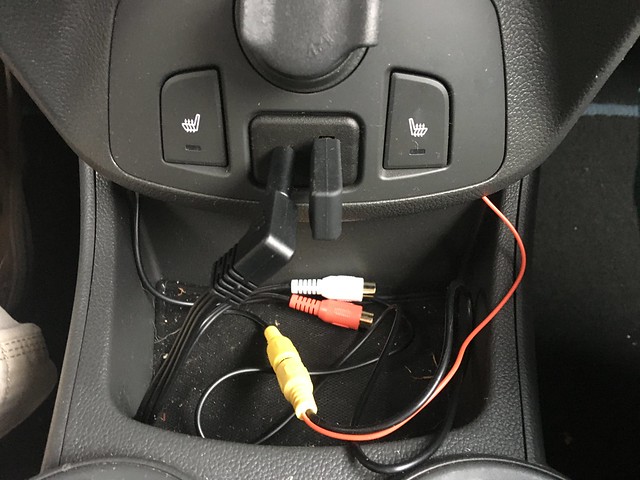 RCA to 3.5mm Adapter plugged in (with additional OMTP-CTIA adapter because I ordered the wrong cable.) 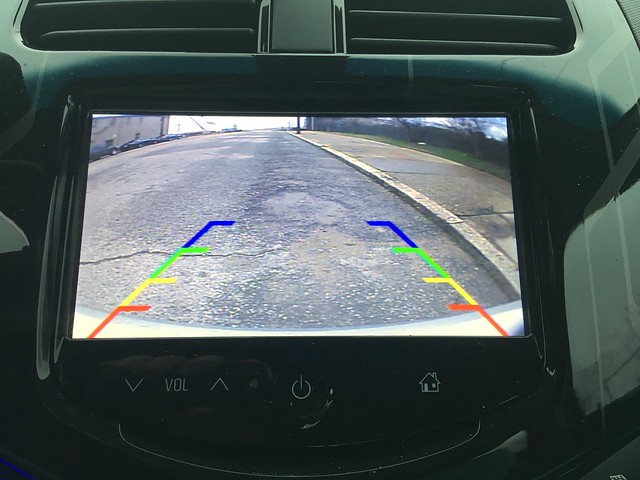 Backup camera view on Mylink screen after tapping the screen to turn off the menus on the top and bottom.
2016 Spark EV
2017 Volt

Edit: Never mind, it started working. All I did was double check power at the camera before buttoning up the hatch. Maybe it was loose? Anyhow, next question is it normal for the radio to remain in AUX mode after backing up? Having to change back to my music manually is annoying.
----------------------------
I'm trying to wire in a backup camera (the ebay linked one that replaces a license light) using the Padavos method and am having some trouble.

All cables test for continuity from camera to the front and I've triple checked my wiring, even used a different relay. The plug to the camera has 12v backup light and ground. Backup light wire shows 12v at the relay. Nothing happens when the car goes into reverse.

Are the first blue and the purple wire supposed to be tapped into or cut and the video spliced to the harness side? I did the later. Instructions aren't clear but I wouldn't think it makes a difference if you didn't want to use the jack for video.

Thanks for the help.

It appears from this video - https://www.reddit.com/r/SparkEV/commen ... head_unit/ that it should switch back. I am just plugging into the Aux In and I have to manually switch back.
2016 Spark EV
2017 Volt

I figured out some of my problems. It's working reliably now at least. The instructions have terminals 85 and 86 reversed. 85 should be ground (blue wire) and 86 gets +12v (backup light). Apparently that matters on some relays (mine).

Here's the wiring diagram that padavos sent me:
Anyone is welcome to improve the set up, if you find something.